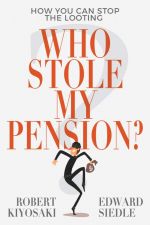 Who Stole My Pension?: How You Can Stop the Looting...

Who Stole My Pension?: How You Can Stop the Looting

by Robert Kiyosaki , Edward Siedle
ISBN 9781612681030
List Price $18.95 Priced from $12.89 - $13.64
$18.95
In stock
SKU
9781612681030
It’s estimated that there are over 50 million pensioners―in the United States alone. Like the United States, the United Kingdom, Japan, Italy, Germany and many other countries around the world are all in big trouble when it comes to the solvency of their pension funds. Who Stole My Pension? was written to give them guidance, resources, and tools so they can take action… and stop the looting.
Paperback
This product qualifies for FREE US Ground Shipping on orders over $100.
Price Chart

We are in the early stages of the greatest retirement crisis in the history of our nation and, indeed, the entire world. According to the World Health Organization, nearly two billion people around the world are expected to be over age 60 by 2050, a figure that’s more than triple what it was in 2000. For better or for worse, never before have there been more elderly people living on planet Earth.

One thing is. certain: Doing nothing―sitting back, confident your pension check is “in the mail”―is not an option. That’s a risk you can’t afford to take.

According to Edward Siedle, a former attorney with the United States Securities and Exchange Commission and America’s leading expert in pension looting, “In the decades to come, we will witness hundreds of millions of elders worldwide, including America’s Baby Boomers, slipping into poverty. Too frail to work, too poor to retire will become the “new normal” for many of the aged.”

Kiyosaki, who like Siedle saw this crisis looming years ago, complements the facts and stats Siedle puts forth with strategies on how retirees can take control―not only their pensions, but their financial futures. Kiyosaki writes about the fact that his father, a highly educated man he calls his poor dad, wasn’t poor until he lost his job, his paycheck―and his pension. “His PHD couldn’t save him,” says Kiyosaki, who has dedicated his life to teaching and financial literacy advocacy.

In Who Stole My Pension? the authors focus on the most misunderstood and ignored cause of the pension crisis: mismanagement of pensions and investments. The culprits that are looting the pensions of public school teachers, firefighters, police, as well as private sector workers, are on Wall Street. The Wall Street casinos charging high fees for gambling in risky hedge funds and other speculative investments, outrageous investment-industry conflicts of interest, and outright violations of the law. Who Stole My Pension? is an in-depth assessment of the pension crisis that the world is facing today and what millions around the world―employees who expected to have pension income at retirement―can do about it.

The authors recount a history of pension failures, inexperienced boards, gambling, looting and other horror stories―with a focus on action steps workers and retirees can take to quickly determine if a pension is being mismanaged as well as the concrete steps they can take to end decades of pension mismanagement. They detail critical questions retirees can ask―and guidance regarding how to act on what they learn.

The book, Who Stole My Pension?: How You Can Stop the Looting [Bulk, Wholesale, Quantity] ISBN# 9781612681030 in Paperback by Robert Kiyosaki; Edward Siedle may be ordered in bulk quantities. Minimum starts at 25 copies. Availability based on publisher status and quantity being ordered.
Product Detail
Login/Create an Account With
Login with Facebook
Login with Google
Login with Amazon

Who Stole My Pension?: How You Can Stop the Looting...