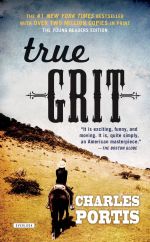 The book, True Grit: Young Readers Edition [Bulk, Wholesale, Quantity] ISBN# 9781468313154 in Paperback by Charles Portis may be ordered in bulk quantities. Minimum starts at 25 copies. Availability based on publisher status and quantity being ordered.
Product Detail
Login/Create an Account With
Login with Facebook
Login with Google
Login with Amazon