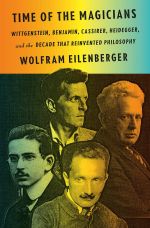 Time of the Magicians: Wittgenstein, Benjamin, Cassirer, Heidegger, an...

Time of the Magicians: Wittgenstein, Benjamin, Cassirer, Heidegger, and the Decade That Reinvented Philosophy

by Wolfram Eilienberger
ISBN 9780525559665
List Price $30.00 Priced from $15.00 - $18.60
$30.00
In stock
SKU
9780525559665
A grand narrative of the intertwining lives of Walter Benjamin, Martin Heidegger, Ludwig Wittgenstein, and Ernst Cassirer, major philosophers whose ideas shaped the twentieth century
Hardcover
This product qualifies for FREE US Ground Shipping on orders over $100.
Price Chart

The year is 1919. The horror of the First World War is still fresh for the protagonists of Time of the Magicians, each of whom finds himself at a crucial juncture. Benjamin, whose life is characterized by false starts and unfinished projects, is trying to flee his overbearing father and floundering in his academic career, living hand to mouth as a critic. Wittgenstein, by contrast, has dramatically decided to divest himself of the monumental fortune he stands to inherit, as a scion of one of the wealthiest industrial families in Europe, in search of absolute spiritual clarity. Meanwhile, Heidegger, having managed to avoid combat in war by serving instead as a meteorologist, is carefully cultivating his career, aligning himself with the great Edmund Husserl and renouncing his prior Catholic associations. Finally, Cassirer is working furiously on the margins of academia, applying himself intensely to his writing and the possibility of a career at Hamburg University. The stage is set for a great intellectual drama, which will unfold across the next decade. The lives and ideas of this extraordinary philosophical quartet will converge as they become world historical figures. But as the Second World War looms on the horizon, their fates will be very different.

Wolfram Eilenberger stylishly traces the paths of these remarkable and turbulent lives, which feature not only philosophy but some of the most important economists, politicians, journalists, and artists of the century, including John Maynard Keynes, Hannah Arendt, and Bertrand Russell. In doing so, he tells a gripping story about some of history's most ambitious and passionate thinkers, and illuminates with rare clarity and economy their brilliant ideas, which all too often have been regarded as enigmatic or opaque.

The book, Time of the Magicians: Wittgenstein, Benjamin, Cassirer, Heidegger, and the Decade That Reinvented Philosophy [Bulk, Wholesale, Quantity] ISBN# 9780525559665 in Hardcover by Wolfram Eilienberger may be ordered in bulk quantities. Minimum starts at 25 copies. Availability based on publisher status and quantity being ordered.
Product Detail
Login/Create an Account With
Login with Facebook
Login with Google
Login with Amazon

Time of the Magicians: Wittgenstein, Benjamin, Cassirer, Heidegger, an...