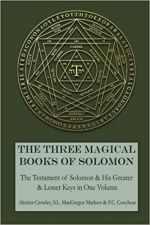 The Three Magical Books of Solomon: The Greater and Lesser Keys & ...

The Three Magical Books of Solomon: The Greater and Lesser Keys & The Testament of Solomon

The Key of Solomon the King was originally researched and translated by S.L. MacGregor Mathers from ancient manuscripts in the British museums. Included by Mathers is the Order of the Pentacles of Solomon, the Ancient Fragment of the Key of Solomon, The Qabalistic Invocation of Solomon, and 15 plates full of figures, seals and charts, as well as the original text giving detailed instruction for spells and invocations.

The work is traditionally divided into two books detailing the Key of King Solomon. Book One explains the operation of conjurations, curses, spells and other magical works. Book Two instructs the practitioner on the proper attire, purification rituals and other means of obtaining the goals of the Goetia. Between these two books is the list of plates that contain numerous illustrations and secret seals of Solomon, including the Mystical Seal of Solomon, the Pentacles of Solomon, and the Mystical Alphabet, which impart the mechanisms and requirements for the invocation of spirits and demons.

The Lesser Key of Solomon, or the Clavicula Salomonis Regis, or Lemegeton, is a compilation of materials and writings from ancient sources making up a text book of magic or “grimoire.” Portions of this book can be traced back to the mid-16th to 17th centuries, when occult researchers such as Cornelius Agrippa and Johannes Trithemisus assembled what they discovered during their investigations into their own great works.

As a modern grimoire, the Lesser Key of Solomon has seen several editions with various authors and editors taking liberty to edit and translate the ancient writings and source material. In 1898, Arthur Edward Waite published his The Book of Black Magic and of Pacts, which contained large portions of the Lemegeton. He was followed by Mathers and Crowley in 1904 who published The Goetia: The Lesser Key of Solomon.

In the preface to this edition, it is explained that a “Secret Chief” of the Rosicrucian Order directed the completion of the book. The original editor was a G. H. Fra. D.D.C.F. who translated ancient texts from French, Hebrew, and Latin, but was unable to complete his labors because of the martial assaults of the Four Great Princes. Crowley was then asked to step in and finish what the previous author had begun.

The Testament of Solomon is a pseudepigraphical work attributed to King Solomon the Wise of the Old Testament. Written in the first-person narrative, the book tells the story of the creation of the magical ring of King Solomon and how Solomon’s ring was used to bind and control demons, including Beelzebub. In this book of King Solomon, the discourses between the King and the various spirits are told, and the story shows how Solomon uses his wisdom to withstand the demons’ tricks and guile and enlist their aid in the building of his temple.

The manuscripts from which this work was discovered date from the 15th, 16th, and 17th centuries. All were written in Greek. This dating makes most experts believe that the work is medieval. But some scholars, including D.C. Duling, argue that it is likely that the work comes from the 5th or 6th centuries.

No matter the date, the text provides an immensely interesting description of how King Solomon tamed various demons to build his temple. The text includes predictions of the coming of Christ, as one demon explains to Solomon that while he may be bound, the only thing that can truly take his power away is the man born from a virgin who will be crucified by the Jews..

The book, The Three Magical Books of Solomon: The Greater and Lesser Keys & The Testament of Solomon [Bulk, Wholesale, Quantity] ISBN# 9781946774095 in Paperback by S.L. MacGregor Mathers; F.C. Conybear; Aleister Crowley may be ordered in bulk quantities. Minimum starts at 25 copies. Availability based on publisher status and quantity being ordered.
Product Detail
Login/Create an Account With
Login with Facebook
Login with Google
Login with Amazon

The Three Magical Books of Solomon: The Greater and Lesser Keys & ...