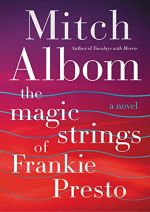 The Magic Strings of Frankie Presto...

The Magic Strings of Frankie Presto

by Mitch Albom
ISBN 9780062294418
List Price $25.99 Priced from $12.74 - $15.85
$25.99
In stock
SKU
9780062294418
Mitch Albom creates his most unforgettable fictional character—Frankie Presto, the greatest guitarist to ever walk the earth—in this magical novel about the bands we join in life and the power of talent to change our lives.
Paperback
Hardcover
This product qualifies for FREE US Ground Shipping on orders over $100.
Price Chart

The book, The Magic Strings of Frankie Presto [Bulk, Wholesale, Quantity] ISBN# 9780062294418 in Hardcover by Albom, Mitch may be ordered in bulk quantities. Minimum starts at 25 copies. Availability based on publisher status and quantity being ordered.
Product Detail
Login/Create an Account With
Login with Facebook
Login with Google
Login with Amazon

The Magic Strings of Frankie Presto...