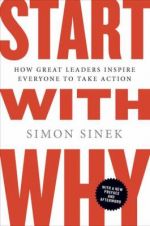 Start with Why: How Great Leaders Inspire Everyone to Take Action...

Start with Why: How Great Leaders Inspire Everyone to Take Action

Add to Compare Add to Compare
Price Match
Print Add to Wish List
The inspiring, life-changing bestseller by the author of LEADERS EAT LAST and TOGETHER IS BETTER.
Compare Products (0)
Compare titles Cover Price, Dimensions, and Reviews. Just simply add titles and click compare.
Product already available in compare list
Compare Products
Clear All
Overview
Product Details
About the Author
Overview
The inspiring, life-changing bestseller by the author of LEADERS EAT LAST and TOGETHER IS BETTER. In 2009, Simon Sinek started a movement to help people become more inspired at work, and in turn inspire their colleagues and customers. Since then, millions have been touched by the power of his ideas, including more than 28 million who’ve watched his TED Talk based on START WITH WHY -- the third most popular TED video of all time. Sinek starts with a fundamental question: Why are some people and organizations more innovative, more influential, and more profitable than others? Why do some command greater loyalty from customers and employees alike? Even among the successful, why are so few able to repeat their success over and over? People like Martin Luther King Jr., Steve Jobs, and the Wright Brothers had little in common, but they all started with WHY. They realized that people won't truly buy into a product, service, movement, or idea until they understand the WHY behind it. START WITH WHY shows that the leaders who've had the greatest influence in the world all think, act, and communicate the same way -- and it's the opposite of what everyone else does. Sinek calls this powerful idea The Golden Circle, and it provides a framework upon which organizations can be built, movements can be led, and people can be inspired. And it all starts with WHY. Watch Simon Sinek's 15-minute interview on Inside Quest:

The book, Start with Why: How Great Leaders Inspire Everyone to Take Action [Bulk, Wholesale, Quantity] ISBN# 9781591846444 in Paperback by Sinek, Simon may be ordered in bulk quantities. Minimum starts at 25 copies. Availability based on publisher status and quantity being ordered.
Product Detail
About the Author

Described as “a visionary thinker with a rare intellect,” Sinek teaches leaders and organizations how to inspire people. With a bold goal to help build a world in which the vast majority of people go home everyday feeling fulfilled by their work, Sinek is leading a movement to inspire people to do the things that inspire them.

He is best known for popularizing the concept of Why and for the talk he gave on the subject that became the second most watched talk of all time on TED.com.

Sinek’s unconventional and innovative views on business and leadership have attracted international attention and have earned him invitations to meet with an array of leaders and organizations, including: 3M, Disney, KPMG, Pfizer, NBC/Universal, jetBlue, the military, multiple government agencies and entrepreneurs. Sinek has also had the honor of presenting his ideas at the United Nations, the United States Congress and to the senior leadership of the United States Air Force at the Pentagon.

Start with Why: How Great Leaders Inspire Everyone to Take Action...