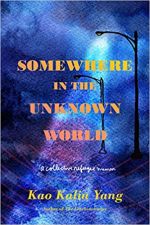 Somewhere in the Unknown World: A Collective Refugee Memoir...

Somewhere in the Unknown World: A Collective Refugee Memoir

by Kao Kalia Yang
ISBN 9781250296856
List Price $17.99 Priced from $8.82 - $11.51
$17.99
In stock
SKU
9781250296856
Somewhere in the Unknown World is a themed collection of stories of refugees from around the world who have converged on Minneapolis, collected and told by the award-winning author of The Latehomecomer and The Song Poet.
Paperback
This product qualifies for FREE US Ground Shipping on orders over $100.
Price Chart

Back in the 1980s, Minnesota's University Avenue was barely clinging to life. Lined with church thrift stores, boarded windows, and prostitutes leaning against streetlights, the sidewalks were thick with bloody, discarded needles. Today, University Avenue is a bustling commercial center, a hub of Halal butchers, Mexican carnicerias, grocery stores selling delicacies to new arrivals from Ethiopia and Bosnia, Iraq and China. A dying strip of America has been revived by the stateless.

As the country's doors are closing and nativism is on the rise, Kao Kalia Yang―herself a refugee from Laos―set out to tell the stories of the refugees to whom University Avenue is now home. Here are people who have summoned the energy and determination to make a new life even as they carry an extraordinary burden of hardship, loss, and emotional damage: Irina, an ex-Soviet, who still hoards magical American fruit―bananas!―under her bed; the Thai brothers of Vinai and their business selling purified water to gullible immigrants; the Kareni boys, who have brought Minnesota to basketball glory.

In Yang's exquisite, poetic, and necessary telling, the voices of refugees from all over the world restore humanity to America's strangers and redeem its long history of welcome.br>
The book, Somewhere in the Unknown World: A Collective Refugee Memoir [Bulk, Wholesale, Quantity] ISBN# 9781250296856 in Paperback by Kao Kalia Yang may be ordered in bulk quantities. Minimum starts at 25 copies. Availability based on publisher status and quantity being ordered.
Product Detail
Login/Create an Account With
Login with Facebook
Login with Google
Login with Amazon

Somewhere in the Unknown World: A Collective Refugee Memoir...