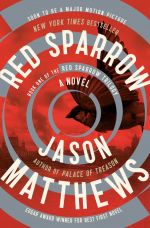 Add to Compare Add to Compare
Price Match
Print Add to Wish List
Soon to be a major motion picture starring Jennifer Lawrence and Joel Edgerton!
Compare Products (0)
Compare titles Cover Price, Dimensions, and Reviews. Just simply add titles and click compare.
Product already available in compare list
Compare Products
Clear All
Overview
Product Details
Overview
Soon to be a major motion picture starring Jennifer Lawrence and Joel Edgerton! In the tradition of John le Carré, the bestselling, impossible-to-put-down, espionage thriller that is “a primer in twenty-first century spying” (The New York Times Book Review), written with the insider detail that only a veteran CIA operative could know—and shortlisted for an Edgar Award. State intelligence officer Dominika Egorova struggles to survive in the cast-iron bureaucracy of post-Soviet intelligence. Drafted against her will to become a “Sparrow,” a trained seductress in the service, Dominika is assigned to operate against Nathaniel Nash, a first-tour CIA officer who handles the CIA’s most sensitive penetration of Russian intelligence. The two young intelligence officers, trained in their respective spy schools, collide in a charged atmosphere of tradecraft, deception, and, inevitably, a forbidden spiral of carnal attraction that threatens their careers and the security of America’s most valuable mole in Moscow. Seeking revenge against her soulless masters, Dominika begins a fateful double life, recruited by the CIA to ferret out a high-level traitor in Washington; hunt down a Russian illegal buried deep in the US military and, against all odds, to return to Moscow as the new-generation penetration of Putin’s intelligence service. Dominika and Nathaniel’s impossible love affair and twisted spy game come to a deadly conclusion in the shocking climax of this electrifying, up-to-the minute spy thriller. Taking place in today’s Russia, still ruled with an iron fist by Prime Minister Vladimir Putin, Red Sparrow displays author Jason Matthews’s insider knowledge of espionage, counter-espionage, surveillance tradecraft, recruiting spies, interrogation, and intelligence gathering. As The Washington Post hails, this is a “sublime and sophisticated debut…a first-rate novel as noteworthy for its superior style as for its gripping depiction of a secretive world.”

The book, Red Sparrow: A Novel (The Red Sparrow Trilogy) [Bulk, Wholesale, Quantity] ISBN# 9781476706139 in Paperback by Jason Matthews may be ordered in bulk quantities. Minimum starts at 25 copies. Availability based on publisher status and quantity being ordered.
Product Detail
Login/Create an Account With
Login with Facebook
Login with Google
Login with Amazon