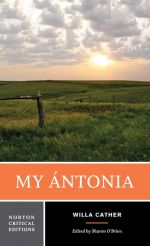 Set in the Nebraska landscape in a community evocative of Cather’s own (Red Cloud), My Ántonia tells the story of Ántonia Shimerda, a Bohemian immigrant, and Jim Burden, who like Cather was uprooted from Virginia to the Nebraska prairie. Ántonia and Jim, like many of the other characters in this 1918 novel, are based on Cather’s childhood friends. This Norton Critical Edition is based on the first published edition of the novel. It is accompanied by explanatory footnotes, key illustrations, an introduction that gives readers a historical overview of both author and novel, and a note on the text.

A Chronology of Cather’s life and work and a Selected Bibliography are also included.

The book, My Ántonia (Norton Critical Editions) [Bulk, Wholesale, Quantity] ISBN# 9780393967906 in Paperback by Willa Cather; Sharon O'Brien may be ordered in bulk quantities. Minimum starts at 25 copies. Availability based on publisher status and quantity being ordered.
Product Detail
Login/Create an Account With
Login with Facebook
Login with Google
Login with Amazon