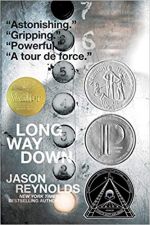 by Jason Reynolds
ISBN 9781481438261
List Price $11.99 Priced from $5.88 - $7.31
$11.99
In stock
SKU
9781481438261
An ode to Put the Damn Guns Down, this is New York Times bestselling author Jason Reynolds’s electrifying novel that takes place in sixty potent seconds—the time it takes a kid to decide whether or not he’s going to murder the guy who killed his brother.
Paperback
This product qualifies for FREE US Ground Shipping on orders over $100.
Price Chart

The book, Long Way Down [Bulk, Wholesale, Quantity] ISBN# 9781481438261 in Paperback by Jason Reynolds may be ordered in bulk quantities. Minimum starts at 25 copies. Availability based on publisher status and quantity being ordered.
Product Detail
Login/Create an Account With
Login with Facebook
Login with Google
Login with Amazon