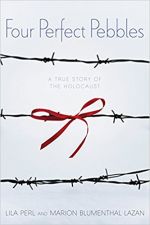 by Marion Blumenthal Lazan , Lila Perl
ISBN 9780062489968
List Price $6.99 Priced from $3.43 - $4.26
$6.99
In stock
SKU
9780062489968
The twentieth-anniversary edition of Marion Blumenthal Lazan’s acclaimed Holocaust memoir features new material by the author, a reading group guide, a map, and additional photographs. “The writing is direct, devastating, with no rhetoric or exploitation. The truth is in what’s said and in what is left out.”—ALA Booklist (starred review)
Paperback
This product qualifies for FREE US Ground Shipping on orders over $100.
Price Chart

The book, Four Perfect Pebbles: A Holocaust Story [Bulk, Wholesale, Quantity] ISBN# 9780062489968 in Paperback by Perl, Lila;Lazan, Marion Blumenthal may be ordered in bulk quantities. Minimum starts at 25 copies. Availability based on publisher status and quantity being ordered.
Product Detail
Login/Create an Account With
Login with Facebook
Login with Google
Login with Amazon