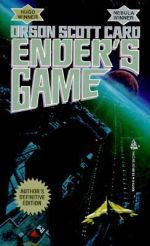 by Orson Scott Card
ISBN 9780812550702
List Price $7.99 Priced from $3.92 - $5.11
$7.99
In stock
SKU
9780812550702
In order to develop a secure defense against a hostile alien race's next attack, government agencies breed child geniuses and train them as soldiers.
Library Binding
Paperback
Mass Market Paperback
Allow 2-3 business days for product to leave warehouse on ground shipments
This product qualifies for FREE US Ground Shipping on orders over $100.
Price Chart

The book, Ender's Game [Bulk, Wholesale, Quantity] ISBN# 9780812550702 in Mass Market Paperback by Card, Orson Scott may be ordered in bulk quantities. Minimum starts at 25 copies. Availability based on publisher status and quantity being ordered.
Product Detail
Login/Create an Account With
Login with Facebook
Login with Google
Login with Amazon