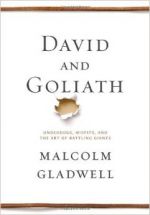 David and Goliath: Underdogs, Misfits, and the Art of Battling Giants...

David and Goliath: Underdogs, Misfits, and the Art of Battling Giants

by Malcolm Gladwell
ISBN 9780316204361
List Price $29.00 Priced from $14.21 - $17.69
$29.00
In stock
SKU
9780316204361
Everyone knows the story of David and Goliath. Three thousand years ago on the battlefields of ancient Palestine, a small shepherd boy defeated a mighty warrior with nothing but a stone and a sling. David was an underdog and Goliath was a giant, making David's victory improbable and miraculous because he shouldn't have won... or should he have? Find out in the “David and Goliath” business book!
Hardcover
This product qualifies for FREE US Ground Shipping on orders over $100.
Price Chart

Malcolm Gladwell, the #1 best-selling author of “The Tipping Point,” “Blink,” “Outliers,” and “What the Dog Saw,” returns with his most provocative book yet. “David and Goliath: Underdogs, Misfits, and the Art of Battling Giants” challenges how we think about disadvantages and obstacles. Gladwell starts by explaining what really happened between the giant and the shepherd boy thousands of years ago. Next he examines Northern Ireland, the minds of civil rights leaders and cancer researchers, murder and the true cost of revenge, as well as the dynamics of both successful and unsuccessful classrooms. He uses these real-world stories to demonstrate how important and beautiful things in the world can arise from adversity and suffering.

Offering a new interpretation of what it means to be discriminated against, cope with a disability, or suffer from a number of apparent setbacks, this best-selling business book draws upon the power of storytelling, history and psychology to reshape the way we think of the world around us. The “David and Goliath” business book is a must-read for anyone who has ever felt like an underdog; a timeless business book for entrepreneurs, startups and small businesses.

Purchase “David and Goliath” in bulk with BookPal, the leading eBook and book wholesale distributor, to receive a special wholesale discount. Browse BookPal's extensive online catalog to find more bulk business books, eBooks in bulk, and custom journals in bulk for your company.

The book, David and Goliath: Underdogs, Misfits, and the Art of Battling Giants [Bulk, Wholesale, Quantity] ISBN# 9780316204361 in Hardcover by Gladwell, Malcolm may be ordered in bulk quantities. Minimum starts at 25 copies. Availability based on publisher status and quantity being ordered.
Product Detail
About the Author

Malcolm Gladwell has been a staff writer at The New Yorker since 1996. He is the author of The Tipping Point, Blink, Outliers, and What the Dog Saw. Prior to joining The New Yorker, he was a reporter at the Washington Post. Gladwell was born in England and grew up in rural Ontario. He now lives in New York.

"Provocative....David and Goliath is a lean, consuming read....The book's most crafty, engaging chapter ties together the Impressionist movement and college choices to highlight the fact that gaining admission to elite institutions, which we typically perceive as an advantage, is no guarantee of success." ---John Wilwol, San Francisco Chronicle

"David and Goliath readers will travel with colorful characters who overcame great difficulties and learn fascinating facts about the Battle of Britain, cancer medicine and the struggle for civil rights, to name just a few topics upon which Mr. Gladwell's wide-ranging narrative touches. This is an entertaining book." ---Christopher F. Chabris, Wall Street Journal

"Fascinating....Gladwell is a master of synthesis. This perennially bestselling author prides himself on radical re-thinking and urges the rest of us to follow suit." ---Heller McAlpin, Washington Post

"What propels the book, like all of Gladwell's writing, is his intoxicating brand of storytelling. He is the master of mixing familiar elements with surprise counter-intuitions, and then seasoning with a sprinkling of scientific evidence....Gladwell is a master craftsman, an outlier amongst authors." ---Rob Brooks, Huffington Post

"Gladwell sells books by the millions because he is masterful at explaining how the world works---the power of critical mass, the arbitrariness of success, etc.---packaging his ideas in fun, accessible, and poignant vignettes." ---Lionel Beehner, USA Today

"Gladwell's most provocative book yet. David and Goliath challenges how we think about obstacles and disadvantages, drawing upon history, psychology, and powerful narrative talent to rethink how we view the world around us and how to deal with the challenges life throws at us." ---Susanne Jaffe, Columbus Dispatch

"The bestselling author behind the inventive Outliers, Blink, and The Tipping Point is back with another thought provoking theory that fascinates, entertains, and informs. He gives underdogs their due this time, challenging everything readers believe about facing-and conquering-life's stumbling blocks, using the 'real' story of David and Goliath and more to make his point." ---Celeste Williams, Fort Worth Star-Telegram

"Gladwell has made a career out of questioning conventional wisdom, and here he examines the allegedly unlikely triumph of the weak over the mighty and shows it's not so unlikely after all. 4 stars." ---Judith Newman, People Magazine

"The 50-year-old Canadian is a superstar, the most popular staff writer on The New Yorker and a hero in the frequent-flier lounge where journalism, social science, business management, and self-help hang out....It's a good story and he's got plenty more." ---Jeff Baker, The Oregonian

"Pop culture pundit Malcolm Gladwell is an idea blender, mixing concepts from vastly different sources (everything from business to science to the Bible) to produce new ways of seeing the world." ---Barbara O'Dair, Reader's Digest

"Engrossing.... Gladwell's singular gift is animating the experience of his subjects. He has an uncanny ability to simplify without being simplistic: clean and vivid Strunk and White prose in the service of peerless storytelling." ---David Takami, Seattle Times

"Contemporary society can't escape history when Malcolm Gladwell explains the world as he does with David and Goliath."---Jane Henderson, St. Louis Post-Dispatch

"In David and Goliath, Malcolm Gladwell explores the dynamics that inform and effect our everyday lives. By analyzing the Biblical account of the clash between David and Goliath, Gladwell presents a bold new interpretation of the lessons we should apply from it." ---Today Show

David and Goliath: Underdogs, Misfits, and the Art of Battling Giants...