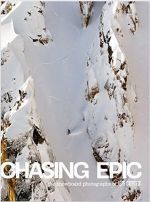 Jeff Curtes has been at the forefront of the snowboarding industry’s imagery since his first published work back in 1992. In 1994, Curtes signed with Burton Snowboards and had been their principal photographer until 2012, nearly 20 years behind the lens on the snow. Jeff’s work with Burton, originating with action-centric images, was unique in that it came from within the core snowboarder’s lifestyle. He was living and breathing snowboarding with his brother, Joe Curtes, as they traveled from the Midwest to the Mountains of the West Coast. Burton allowed Curtes to travel the world in search of the epic conditions that every snowboarder dreams of, and, in return, Curtes’s camera delivered an overwhelming collection of photographs to their light table.These images not only made incredible advertising and catalog content but also defined a subculture and captured the early history of snowboarding like no others before.

The book, Chasing Epic: The Snowboard Photographs of Jeff Curtes [Bulk, Wholesale, Quantity] ISBN# 9781623260286 in Hardcover by Jeff Curtes; Jake Burton; Steve Crist; Megan Shoemaker may be ordered in bulk quantities. Minimum starts at 25 copies. Availability based on publisher status and quantity being ordered.
Product Detail
Login/Create an Account With
Login with Facebook
Login with Google
Login with Amazon