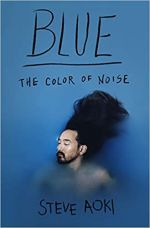 by Steve Aoki , Daniel Paisner
ISBN 9781250111678
List Price $27.99 Priced from $13.72 - $17.91
$27.99
In stock
SKU
9781250111678
Blue is the remarkable story―in pictures and words―of Steve Aoki, the superstar DJ/producer who started his career as a vegan straightedge hardcore music kid hellbent on defying his millionaire father, whose unquenchable thirst to entertain―inherited from his dad, Rocky Aoki, founder of Benihana―led him to global success and two Grammy nominations.
Hardcover
This product qualifies for FREE US Ground Shipping on orders over $100.
Price Chart

Sometimes I think my whole life can be seen through shades of blue... ―Steve Aoki

Blue is the remarkable story―in pictures and words―of Steve Aoki, the superstar DJ/producer who started his career as a vegan straightedge hardcore music kid hellbent on defying his millionaire father, whose unquenchable thirst to entertain―inherited from his dad, Rocky Aoki, founder of Benihana―led him to global success and two Grammy nominations.

Ranked among the top ten DJs in the world today, Grammy-nominated artist, producer, label head, fashion designer, philanthropist and entrepreneur Steve Aoki is an authentic global trendsetter and tastemaker who has been instrumental in defining contemporary youth culture. Known for his outrageous stage antics (cake throwing, champagne spraying, and the ‘Aoki Jump’) and his endearing personality, Steve is also the brains behind indie record label Dim Mak, which broke acts such as The Kills, Bloc Party, and The Gossip. Dim Mak also put out the first releases by breakout EDM stars The Chainsmokers and The Bloody Beetroots, as well as the early releases for Grammy-nominated artist Iggy Azalea, in addition to EDM star Zedd and electro duo MSTRKFT.

In Blue, Aoki recounts the epic highs of music festivals, clubs and pool parties around the world, as well as the lows of friendships lost to drugs and alcohol, and his relationship with his flamboyant father. Illustrated with candid photos gathered throughout his life, the book reveals how Aoki became a force of nature as an early social media adopter, helping to turn dance music into the phenomenon it is today. All this, while remaining true to his DIY punk rock principles, which value spontaneity, fun and friendship above all else―demonstrable by the countless cakes he has flung across cities worldwide.

The book, Blue: The Color of Noise [Bulk, Wholesale, Quantity] ISBN# 9781250111678 in Hardcover by Steve Aoki; Daniel Paisner may be ordered in bulk quantities. Minimum starts at 25 copies. Availability based on publisher status and quantity being ordered.
Product Detail
Login/Create an Account With
Login with Facebook
Login with Google
Login with Amazon