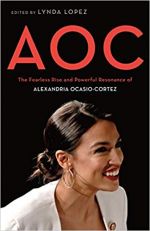 AOC: The Fearless Rise and Powerful Resonance of Alexandria Ocasio-Cor...

AOC: The Fearless Rise and Powerful Resonance of Alexandria Ocasio-Cortez

In the vein of Notorious RBG, seventeen writers explore the multiple meanings of a young Latina politician who has already made history.
Hardcover
This product qualifies for FREE US Ground Shipping on orders over $100.
Price Chart

In the vein of Notorious RBG, seventeen writers explore the multiple meanings of a young Latina politician who has already made history.

From the moment Alexandria Ocasio-Cortez beat a ten-term incumbent in the primary election for New York’s 14th, her journey to the national, if not world, stage, was fast-tracked. Six months later, as the youngest Congresswoman ever elected, AOC became one of a handful of Latina politicians in Washington, D.C. Just thirty, she represents her generation, the millennials, in many groundbreaking ways: proudly working class, Democratic Socialist, of Puerto Rican descent, master of social media, not to mention of the Bronx, feminist―and a great dancer.

AOC investigates her symbolic and personal significance for so many, from her willingness to use her imperfect bi-lingualism, to the threat she poses by governing like a man, to the long history of Puerto Rican activism that she joins. Contributors span a wide range of voices and ages, from media to the arts and politics:

The book, AOC: The Fearless Rise and Powerful Resonance of Alexandria Ocasio-Cortez [Bulk, Wholesale, Quantity] ISBN# 9781250257413 in Hardcover by Lynda Lopez may be ordered in bulk quantities. Minimum starts at 25 copies. Availability based on publisher status and quantity being ordered.
Product Detail
Login/Create an Account With
Login with Facebook
Login with Google
Login with Amazon

AOC: The Fearless Rise and Powerful Resonance of Alexandria Ocasio-Cor...