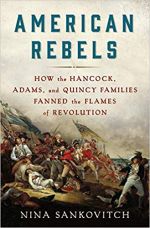 American Rebels: How the Hancock, Adams, and Quincy Families Fanned the Flames of Revolution

Everyone recognizes John Hancock's signature at the bottom of the Declaration of Independence but Nina Sankovitch's American Rebels explores for the first time the family and community connections that led to it. Sankovitch examines the intertwined lives of John Hancock, John Adams, Josiah Quincy Jr, Abigail Smith Adams, and Dorothy Quincy Hancock, and argues for the distinct roles each played in fomenting revolution. Their trajectory from loyal British subjects to American rebels was forged in childhood; and their deeply held convictions, founded in community, fueled their collaborations during the fraught and violent years leading up to the signing of the Declaration of Independence in July of 1776. Sankovitch presents in vivid detail, backed up by extensive and new research, the ties that bound these men and women together (including faith, love, ambition, and envy) and drove them to rebel against England, while also demonstrating how the desire for independence cut across class lines, and how families could be divided, rebels versus loyalists, in pursuing commonly-held goals of opportunity, liberty, and stability.

The book, American Rebels: How the Hancock, Adams, and Quincy Families Fanned the Flames of Revolution [Bulk, Wholesale, Quantity] ISBN# 9781250163288 in Hardcover by Nina Sankovitch may be ordered in bulk quantities. Minimum starts at 25 copies. Availability based on publisher status and quantity being ordered.
Product Detail
Login/Create an Account With
Login with Facebook
Login with Google
Login with Amazon