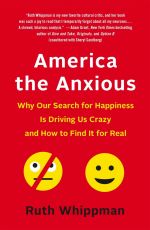 America the Anxious: Why Our Search for Happiness Is Driving Us Crazy ...

America the Anxious: Why Our Search for Happiness Is Driving Us Crazy and How to Find It for Real

Add to Compare Add to Compare
Price Match
Print Add to Wish List
Are you happy? Right now? Happy enough? As happy as everyone else? Could you be happier if you tried harder?
Compare Products (0)
Compare titles Cover Price, Dimensions, and Reviews. Just simply add titles and click compare.
Product already available in compare list
Compare Products
Clear All
Overview
Product Details
Overview
NAMED ONE OF THE 40 BEST BOOKS OF 2016 BY THE NEW YORK POST

I don't think I've enjoyed cultural observations this much since David Foster Wallace's A Supposedly Fun Thing I'll Never Do Again. Reading this book is like touring America with a scary-smart friend who can't stop elbowing you in the ribs and saying, Are you seeing what I'm seeing?! If you want to understand why our culture incites pure dread and alienation in so many of us (often without always recognizing it), read this book. ―Heather Havrilesky, writer behind Ask Polly for New York Magazine and nationally bestselling author of How to Be a Person in the World

Are you happy? Right now? Happy enough? As happy as everyone else? Could you be happier if you tried harder?

After she packed up her British worldview (that most things were basically rubbish) and moved to America, journalist and documentary filmmaker Ruth Whippman found herself increasingly perplexed by the American obsession with one topic above all others: happiness. The subject came up everywhere: at the playground swings, at the meat counter in the supermarket, and even―legs in stirrups―at the gynecologist.

The omnipresence of these happiness conversations (trading tips, humble-bragging successes, offering unsolicited advice) wouldn’t let her go, and so Ruth did some digging. What she found was a paradox: despite the fact that Americans spend more time and money in search of happiness than any other nation on earth, research shows that the United States is one of the least contented, most anxious countries in the developed world. Stoked by a multi-billion dollar “happiness industrial complex” intent on selling the promise of bliss, America appeared to be driving itself crazy in pursuit of contentment.

So Ruth set out to get to the bottom of this contradiction, embarking on an uproarious pilgrimage to investigate how this national obsession infiltrates all areas of life, from religion to parenting, the workplace to academia. She attends a controversial self-help course that promises total transformation, where she learns all her problems are all her own fault; visits a “happiness city” in the Nevada desert and explores why it has one of the highest suicide rates in America; delves into the darker truths behind the influential academic “positive psychology movement”; and ventures to Utah to spend time with the Mormons, officially America’s happiest people.

What she finds, ultimately, and presents in America the Anxious, is a rigorously researched yet universal answer, and one that comes absolutely free of charge.

The book, America the Anxious: Why Our Search for Happiness Is Driving Us Crazy and How to Find It for Real [Bulk, Wholesale, Quantity] ISBN# 9781250146052 in Paperback by Ruth Whippman may be ordered in bulk quantities. Minimum starts at 25 copies. Availability based on publisher status and quantity being ordered.
Product Detail
Login/Create an Account With
Login with Facebook
Login with Google
Login with Amazon

America the Anxious: Why Our Search for Happiness Is Driving Us Crazy ...