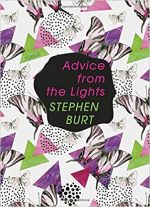 Advice from the Lights: Poems...

Advice from the Lights: Poems

Advice from the Lights is a brilliant and candid exploration of gender and identity and a series of looks at a formative past. It’s part nostalgia, part confusion, and part an ongoing wondering: How do any of us achieve adulthood? And why would we want to, if we had the choice? This collection is woven from and interrupted by extraordinary sequences, including Stephanie poems about Stephen’s female self; poems on particular years of the poet’s early life, each with its own memories, desires, insecurities, and pop songs; and versions of poems by the Greek poet Callimachus, whose present-day incarnation worries (who doesn’t?) about mortality, the favor of the gods, and the career of Taylor Swift. The collection also includes poems on politics, location, and parenthood. Taken all together, this is Stephen Burt’s most personal and most accomplished collection, an essential work that asks who we are, how we become ourselves, and why we make art.

The book, Advice from the Lights: Poems [Bulk, Wholesale, Quantity] ISBN# 9781555977894 in Paperback by Stephanie (previously Stephen) Burt may be ordered in bulk quantities. Minimum starts at 25 copies. Availability based on publisher status and quantity being ordered.
Product Detail
Login/Create an Account With
Login with Facebook
Login with Google
Login with Amazon

Advice from the Lights: Poems...