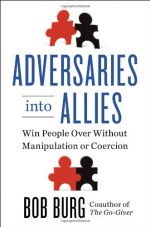 Adversaries Into Allies: Win People Over Without Manipulation or Coerc...

Adversaries Into Allies: Win People Over Without Manipulation or Coercion

Add to Compare Add to Compare
Price Match
Print Add to Wish List
The sages asked, “Who is mighty?” and answered, “That person who can control their own emotions and make, of an enemy, a friend.”
Compare Products (0)
Compare titles Cover Price, Dimensions, and Reviews. Just simply add titles and click compare.
Product already available in compare list
Compare Products
Clear All
Overview
Product Details
About the Author
Overview
The sages asked, “Who is mighty?” and answered, “That person who can control their own emotions and make, of an enemy, a friend.” In the bestselling book The Go-Giver, Bob Burg and John David Mann revolutionized the way we think about success via one very simple lesson: “Shifting one’s focus from getting to giving (constantly and consistently providing value to others) is both very fulfilling and the most profitable way to do business. Now Burg is back with a new book, offering deeper insight about what it means to be truly influential and providing powerful strategies for mastering the art of persuasion. Faced with the task of persuading someone to do what we want, most of us expect, and often encounter, resistance. We see the other person as an adversary and often resort to coercion or manipulation in order to get our way. But while this approach might at times bring us short-term results, it leaves people with a bad feeling about themselves and about us. At that point, our relationship with the person is weakened and our influence dramatically decreased. There is a better way. Drawing on his own experiences and the stories of other influential people, Burg offers five simple principles of what he calls “ultimate influence”—the ability to win people to your side in a way that leaves everyone feeling great about the outcome…and about themselves!: ·Control your own emotions: Responding calmly rather than allowing your emotions to get the better of you will ensure not putting the other person on the defensive but rather help them remain open to your ideas. ·Understand the clash of belief systems: Every individual operates based on an unconscious set of beliefs, experiences, and ideas, which are most likely very different from yours. Understand this and you can avoid confusion and numerous misunderstandings that stand in the way of most people’s ability to influence. ·Acknowledge their ego: People want to feel good about themselves; if you make someone genuinely feel good, you’re one step closer to making an ally. ·Set the proper frame: People react and respond to other people. Approach potential conflicts from a position of benevolence, resolution, and helpfulness and they will follow suit. ·Communicate with tact and empathy: While the first four principles are vital, this is what brings it all home. Saying the right thing at the right time makes all the difference in terms of moving people to your side of the issue and taking the appropriate action that benefits all concerned. In the tradition of Dale Carnegie's How to Win Friends and Influence People and Robert Cialdini's Influence, Burg offers a tried-and-true framework for building alliances at work, at home, and anywhere else you seek to win people over.

The book, Adversaries Into Allies: Win People Over Without Manipulation or Coercion [Bulk, Wholesale, Quantity] ISBN# 9781591846369 in Hardcover by Bob Burg may be ordered in bulk quantities. Minimum starts at 25 copies. Availability based on publisher status and quantity being ordered.
Product Detail
About the Author

Bob Burg is a sought-after speaker at corporate conventions and for entrepreneurial events. He regularly addresses audiences ranging in size from 50 to 16,000 -- sharing the platform with notables including today's top thought leaders, broadcast personalities, Olympic athletes and political leaders including a former United States President. Although for years he was best known for his book "Endless Referrals," over the past few years it's his business parable, "The Go-Giver" (coauthored with John David Mann) that has captured the heart and imagination of his readers. "The Go-Giver" shot to #6 on The Wall Street Journal's Business Best Sellers list just three weeks after its release and reached #9 on BusinessWeek's. Since its release it has consistently stayed in the top 25 on 800ceoread's Business Book Best Seller List. It's an international bestseller and has been translated into 21 languages. It is his fourth book to sell over 250,000 copies. He believes his new book, "Adversaries into Allies: Win People Over Without Manipulation or Coercion" is by far his most important work yet. Bob is an advocate, supporter and defender of the Free Enterprise system, believing that the amount of money one makes is directly proportional to how many people they serve. He is also an unapologetic animal fanatic and serves as a member of the Board of Directors of Furry Friends Adoption and Clinic in Jupiter, Florida.

Adversaries Into Allies: Win People Over Without Manipulation or Coerc...